Sandicliffe was formed when founders Richard Woodhouse and Henry Barton bought a small garage and workshop premises in the area of Stapleford, Nottingham.

The company name literally came from the 'sandy cliff' that still stands behind the Stapleford garage.

Initially, the work was not very lucrative, due to there only being around one million vehicles on the roads of Britain at the time. In addition to this, petrol was relatively inexpensive and the profit margin was low.

However, the pair worked hard to grow the business. The working day started at 7am and finished at 11 pm when Richard would finish manning the petrol pumps and retire to the workshop to mend punctures until the early hours of the morning.

Two months after the business started a young man, Alan Richards, was taken on as an apprentice and became Sandicliffe's first employee.

In the early 1950s, Cartergate Motor Co. in Nottingham was the main Ford dealer in the area and they shared the Nottinghamshire franchise with Evinsons.

Although Richard Woodhouse and Henry Barton were repairing and servicing every type of vehicle on the road at that point in time, they decided to ‘go Ford’. Due to the reasonable prices, the pair believed that low-cost mass-produced cars were likely to sell in greater volume.

Sandicliffe gained the Ford sub-dealership from the Cartergate Motor Company for the Stapleford and Beeston area but this arrangement meant they could only sell four new cars a year.

In the first year of trading the company made a net profit of just £125, which encouraged the decision to branch out into used car sales. This effectively doubled the number of car sales because customers who bought new cars often traded in vehicles which could then be sold second hand.

A huge rise in demand for new cars prompted Richard and Henry to apply to become a Ford main dealer. Ford initially refused Sandicliffe's application, mainly because they didn't think there was enough scope for another main dealer in the Nottingham area. The partners undeterred, challenged the decision and wrote to Ford's chief executive in Britain telling him he did not know his job.

The letter certainly made a positive impact as the pair were summoned to the Chief Executive's office to explain their impertinence. "I just wanted to see the two young boys who tell me I do not know how to run my job" he told them. Richard and Henry successfully explained their reasons for writing and were subsequently told that they would become Ford main dealers from August 1954.

Repairing and selling cars were only two sides of the business. The firm had also been dealing with lorries and vans since the beginning, and an increasing number of vehicles on the road meant expansion was needed at the garage. The workshop expansion was celebrated with a special 'Service Week' in May 1955.

The business continued to expand and in 1962 Sandicliffe moved to Ilkeston. Ford had been looking for a main dealership for South-East Derbyshire and since Sandicliffe had been so successful in Stapleford, the car giant granted the new franchise to the company.

Sub dealerships were in turn granted by Sandicliffe to garages in Codnor, Langley Mill and Eastwood.

The expansion coincided with the launch of the Ford Cortina which would go on to become Britain's best-selling car in the 1970s.

Sandicliffe bought out Gillotts Garage in Loughborough which already had a Ford franchise. Ford happily approved the takeover by granting a transfer of its franchise and the impressive Sandicliffe Loughborough dealership remains on the same site today.

In the same year Sandicliffe's commercial sales were given a boost by the launch of the Ford Transit which has become the best-selling light commercial vehicle in Europe.

In this year Sandicliffe took delivery of the very first Ford Escort.

This model was hugely popular with drivers until its withdrawal in Europe in 2000 and is the second biggest selling car of all time in the UK.

As the business grew, the company was also being recognised for the high quality of its service.

Receiving a Royal Warrant is a rare honour in any industry but particularly in the motor sector. However, from a long family association and a love of show jumping from the late Sixties, Her Majesty Queen Elizabeth II awarded Sandicliffe the Royal Warrant in 1974.

The Royal Warrant was granted by Her Majesty the Queen for the supply and maintenance of a number of horse-boxes and other commercial vehicles and the Warrant remains in place to this day.

As a result of this, the business began to run its first site in Lincolnshire.

Sandicliffe opened a new centre in Long Eaton, the year after the multi award-winning Ford Fiesta was launched in the UK.

Sandicliffe's number of employees rose to over 400 for the first time and the business' turnover increased by a third to £16 million.

Sales of the Ford Sierra began in the UK, helping Sandicliffe's turnover rise to £32 million for the year.

The company's employee numbers rose to 510 the following year when Sandicliffe acquired their first site in Birmingham.

Over the course of the 1980s the company's turnover increased by 270% and the number of employees rose by over a third.

During 1995 a Melton Mowbray dealership joined the Group.

Though the Boston and Ilkeston dealerships were sold in 1996, Sandicliffe acquired their Welford Road Ford premises in Leicester - now the site of the region's state-of-the-art Ford Store.

The Leicester acquisition took Sandicliffe's number of employees to over 700 for the very first time. The company also opened a new dealership in Market Harborough in June 1997.

The Focus has since gone on to be a hugely popular model and has become the 8th best-selling car of all time in the UK.

The company expanded by taking over both the Ford and Suzuki franchises in Hucknall, Nottingham to create a new area of business activity in North Nottinghamshire. Sandicliffe also opened a Kia centre in Leicester in May 2005 and added Mazda, Fiat and Kia to the franchise with the opening of the dealership in Basford.

Expansion continues with the addition of a Ford site at Trent Bridge and a Kia showroom in the existing Melton Mowbray dealership.

Mazda dealerships open in Loughborough and Leicester while the company said goodbye to the Market Harborough centre in August.

Sandicliffe adds another manufacturer to its range with the addition of Nissan Loughborough & ŠKODA dealerships.

This allows the company to increase their number of employees to 611.

The state-of-the-art centre spans over four floors and is one of Europe's leading Nissan centres. This expansion helped the company increase its turnover to over £250 million. 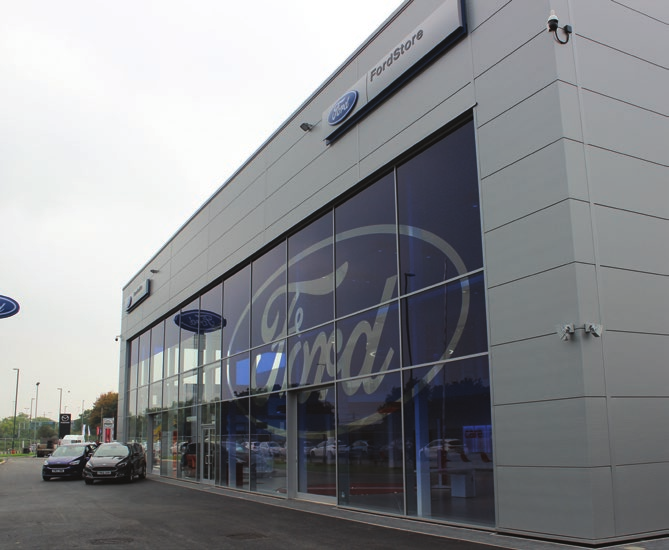 Sandicliffe FordStore Nottingham opens: the largest FordStore in Europe. The centre is home to hundreds of both new & approved used cars. The site has special Ford Technology on display and exclusive models.

Sandicliffe also opened Mazda Nottingham, which now marks the 3rd Sandicliffe dealership on Abbeyfield road, including both the FordStore and Nissan dealership.

The company was also named in the Sunday Times Top Track 250 companies in the UK.

Long standing Managing Director Richard Hobbs hands over the torch to new MD Paul Woodhouse and wishes him the best of luck with the future of Sandicliffe.

The new year brought new changes to Sandicliffe, selling both our ŠKODA Nottingham and ŠKODA Leicester Dealerships, allowing us to focus more on our 4 main franchises, Ford, Nissan, Mazda and Kia.

Sandicliffe takes home Best Online Consumer Experience at the 2020 AM Awards on Thursday 13th February. This is the third time being recognised at the Automotive Management Awards, previously winning Highly Commended Website and Most Improved Dealership.

A historic event that will go down in history books was the first national lockdown during the COVID-19 pandemic. We were honoured to have been able to offer our services to key workers and blue light vehicles for servicing and repair at our Loughborough branch.

Sandicliffe becomes the first ever UK dealership to build the iconic Steve McQueen Bullitt Mustang in June. Only 300 are made globally per year and Sandicliffe FordStore Nottingham became the location for the first UK built model. The 720bhp Bullitt was later debuted at GoodWood SpeedWeek Festival in October.